Are epithelial cancers a “side effect” of mammalian placenta?

Pregnancy is a complex and fascinating process. There is an organism growing inside your womb and, as if it were not enough, it only shares half of your genetic heritage. The immune system is programmed to reject anything that is non-self, yet it tolerates the foetus. Mammalian placenta is a sophisticated organ that not only nourish the foetus, but it also makes feto-maternal immune tolerance possible. Cancer cells share many similarities with placental cells and maybe use the same mechanisms to escape the immune system.

Placental mammals are a diverse group including more than 400 species, mostly rodents and bats, and, of course, humans. In these animals, the fertilised egg gradually colonizes the mother’s womb and feeds directly on her during the whole pregnancy thanks to the placenta, an organ made by both fetal and maternal tissues. For our first nine months of life, we are basically parasites in our mum’s body! 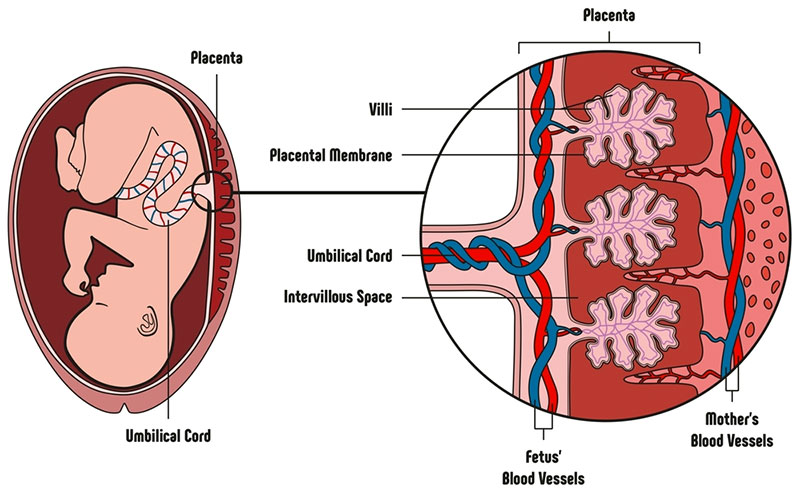 Evolution and side effects

Most mammals are placental. Why did nature opt for such a sophisticated but audacious method for procreation? It is quite difficult to imagine that a human baby could ever come out from an egg like reptiles or birds. The long gestation of complex animals, like humans and most other mammals, would have imposed “super eggs” to provide adequate nourishment and protection until birth. Not a very comfortable solution: who could ever lay such big eggs?

Despite the clear evolutionary advantages of a placenta, it has not escaped scientists’ attention that aggressive epithelial cancers are more frequently cause of natural deaths in placental mammals than in non-placental animals. As the name says, these cancers start in the epithelial tissues, which cover the outside of the body, as the skin, and line all the internal organs, as those of the digestive or respiratory systems, and the body cavities, like chest or abdomen cavity. Placenta is made of epithelial cells too. Probably, it is not a coincidence.

The placenta protects the foetus not only from pathogens or toxins, but also from maternal immune rejection. Fetal DNA contains for a half the genes inherited from the father and yet pregnant women tolerate millions of fetal circulating cells in their bloodstream as well as the foetus itself. Why does the immune system become suddenly “blind”?

It is due to a sophisticated mechanism called “placental immune-editing switch” that represents the result of millions of years of mammal evolution and orchestrates feto-maternal immune tolerance. The complete mechanism has not been clarified yet, but is likely to involve many genetic pathways that in turn modulate immune cells functions.

…and cancer may take advantage of it!

Cancer immunotherapy aims at harnessing the immune system against cancer. It does not always succeed, though: in fact, in order to increase the potency of the immune response against tumour cells, it is crucial to break immune tolerance. Cancer develops in the first place because it escapes the host immune system and, according to some scientists, it does that by activating that “placental switch”, which makes the immune system blind.

All cells in an individual share the same genetic pool, but each cell turns on only some genes, according to its location and function. Cancer cells do not respect the rules and may inappropriately “switch on” the same genes that allow the placenta to orchestrate immune tolerance to protect the foetus...even if there is no foetus to protect! In fact, there are similarities between some epithelial cancer and placental cells in the gene expression profiles of key immune regulatory genes.

This reminds us of the importance of basic research to understand the intimate functioning of our body, in order to prevent tumour cells from using our body’s natural mechanisms and switches for their own advantage.