Bat flu viruses use a “universal” key to infect cells 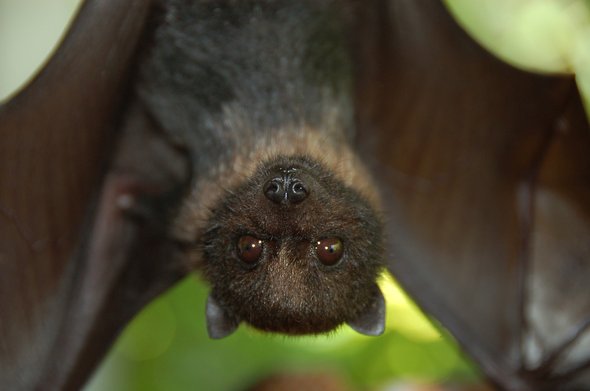 Novel influenza A viruses identified in bats in 2012 use a particular, receptor to infect cells, which was unknown until recently. Researchers from University of Zurich have finally discovered its identity. Bad news is that it is not exclusive to bats, but largely diffused among vertebrates. This makes such viruses potentially transmittable to other species and even more likely than other influenza viruses. The research was published in Nature.

Influenza A is a zoonosis, a disease that can spread from animals to humans, whose major animal reservoirs are pigs or wild birds. These viruses use a lock-and-key system to infect the host: they enter cells by engaging a specific receptor, called sialic acid receptor. At least, that is what avian flu viruses do.

Bat flu viruses do it different

Novel influenza A viruses identified in 2012 in bats act quite differently. Their discovery has raised some concerns, as flu viruses are notoriously predisposed to jump across species and bats already host many pathogens that can spread to domestic animals and humans (Ebola, SARS and Nipah viruses).  However, the real surprise was discovering that bats viruses do not use the sialic acid receptor to enter the host cells.

Let’s take a step back. Sialic acid receptors are slightly different among species; yet, most influenza A viruses affecting humans come from wild birds. Because differences between receptors in birds and humans are very slight, just as slight mutations in haemoagglutinin, the viral protein responsible for infection, make that jump possible. However, this is not very frequent and avian viruses do not easily infect human cells.

Bat flu viruses may be a bigger concern. In fact, researchers finally identified the molecular nature of their elusive receptor. They analysed the gene expression profiles of two different cells, which were either susceptible or resistant to infection. The gene encoding the major histocompatibility complex (MHC) class II was differentially expressed, suggesting that viruses use it to enter cells. And this is not good news: MHC class II is a proteic component of the immune system widely conserved among vertebrates. MHC class II of different species are not identical; but unlike sialic acid receptors, those differences do not seem to represent a barrier against infection spread.

All these data indicate that we should be careful. Zoonosis are a major concern for global health and apparently, there is no reason why bat flu viruses cannot spread to humans. If this has not happened yet, it may be simply be due to lack of opportunity.